Sugarloaf Fire Company Inc.
News Headlines
2020 EMS Membership Drive
Wed. Jan 1st 2020
The Sugarloaf Fire Company Ambulance membership drive will begin in January 2020. Your paid subscription will help us continue to protect you and your loved ones 24 hours a day, 7 days a week. Your pa...
Read more »
EMS Employment Opportunity
Mon. Dec 31st 2018
We are currently accepting applications for EMTs for current open shifts Monday through Friday 7am until 7pm. We are also exploring the possibility of adding additional shifts in the near future. App...
Read more »

It has been brought to our attention that numerous residents have received a solicitation for a donation from a neighboring emergency services organization within the last few days in Sugarloaf Township.

Although you are welcome to donate to any organization you wish, we would like to remind you that the Sugarloaf Fire Company, Inc. is the designated Fire and Emergency Medical Services provider in Sugarloaf Township.

Should you be a Township resident/property owner and have received a solicitation, we ask that it be turned into our organization via dropping it off at 95 W. County Road Sugarloaf, PA 18249 or calling 570-788-2249 so that a list of affected addresses can be compiled.

Your cooperation in this matter is GREATLY appreciated! Rest assured we are committed to serving you for years to come, and your continued support is always appreciated!

Officers and Members of the Sugarloaf Fire Company Inc. 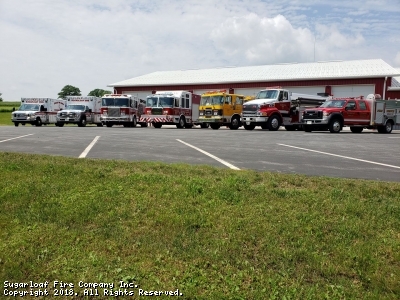 For many years, Conyngham Fire Company (now part of Valley Regional Fire & Rescue) provided protection for the residents of .  But, in January of 1946, approximately 50 township residents got together and formed the Sugarloaf Fire Company.  Their first order of business was to purchase a fire truck and the second was to purchase and install a siren on the Farmer’s Exchange building.  That building today is the Valley Lanes building.  Within just a few short months, the membership grew to over 100 members.

For many years, the fire company was located at the old building, which was located just off of Route 93 on .  But, as the years past and the township grew, so did the needs of the fire company.  It got to a point that when the fire company needed a new truck, they needed to buy the truck based on the size of the garage bay it would fit into, not necessarily the size of the truck that was really needed. Many of the members dreamed of a new station, but felt they would never see it because of the expense of the land and the expense of putting up a building that they really needed.

But, in 2005, one of the members, Keith Hilliard, purchased the farm originally owned by the late Arthur Dick.  He offered to sell 3 acres of ground to the fire company at a very reasonable price and the fire company members started to realize that they might just see a new fire hall built in their lifetime.  The property was located at the intersection of and .  With the help of a county grant, the support of a local bank, the support of many of the Sugarloaf residents along with help of many of the fire company members, the new Sugarloaf Fire Company building became a reality.  The new building is almost 12,000 square feet, has 6 equipment bays, a storage room, a lounge, meeting room, 2 offices, a hall for fund raising, a kitchen, and bathroom facilities.

In January of 2008, Valley Ambulance, which served the township and Conyngham borough for many years merged with Sugarloaf Fire Company.  This was done as a cost saving move so not only does the fire company provide fire and rescue services to their residents, but also medical services, as well.

We are currently accepting applications for EMTs  for current open shifts Monday through Friday 7am until 7pm. We are also exploring the possibility of adding additional shifts in the near future. Application can be found under the files section of this website for download. Please mail complet...

Copyright © 2006-2021. YourFirstDue Inc. All Rights Reserved. Designated trademarks and brands are the property of their respective owners. Content on this web site is supplied by Sugarloaf Fire Company Inc.. YourFirstDue Inc. cannot be held responsible or liable for any content, text, pictures, or any other media found on this web site. Maintained by the members and staff of Sugarloaf Fire Company Inc..
Management Login
Powered by